Any rugby fan will tell you that the Heineken Champions Cup is one of the best tournaments for the sport. It is the equivalent of the Champions League for rugby and trying to win it is the aim of every top club in Europe.

Saracens are still riding high on their recent win and undoubtedly their Irish opponents, Leinster and Munster (semi-final) are already plotting their way back to the top. And while these may be a few of the top tier teams, there are plenty more still in contention.

But first, they all have to get through the group stages!

The draw for the 2019/20 Heineken Champions Cup took place on June 19th 2019. It was live-streamed via the ERC Rugby website from Lausanne in preparation for the final in Marseilles in May 2020. Rugby legends Dimitri Yachvilli and Bryan Habana were on hand to do the draw.

20 teams were split into four different tiers. So five teams in each. Then one team from each tier was drawn to make up the five different competing pools. Teams within each pool will then play each other home and away. The team that tops each group will automatically move through to the knock out stages. The three best runner up teams will then join them.

Having already beaten Munster in the semi-finals this year, Saracens must once again face off against the Red Army if they want to get out of Pool 4. Leinster may have some competition in Pool 1 but realistically, it is Northampton that may give them their biggest challenge.

In Pool 5, the clash between Toulouse and Gloucester looks like it will be a match but Connacht are no slouches and may just give the bigger clubs a run for their money.

The final Heineken Champions Cup draw looks like this:

As for the odds on the potential outright winners, Saracens are already favourites with Paddy Power Sports. They are giving them odds of 2/1 on a back-to-back win in the competition. Leinster are second favourites on odds of 9/4 with Toulouse in third place on odds of 7/1.

Finding themselves in the group of death, Munster is a long way out in the odds on 25/1 for the Heineken Champions Cup. And, with almost no hope of winning the tournament, both Ospreys and Benetton are on 200/1. 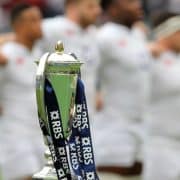 Six Nations Given A Return Date